Physics for Everyone – Book 2 – Molecules

Continuing from Physics for Everyone, Book 3 and Book 4 we now come to the Book 2 in the series, namely Molecules. The story of Book 1 and Book 2 is quite interesting. They were initially written as a single book titled Physics For Everyone – Motion,  Heat. It is a thickish volume (~ 480 pages) which was written by both Lev Landau and Alexander Kitaigorodsky. In Book 2  the main concepts that are dealt are that of

On the back cover:

This is a new edition of the second half of Physics for Everyone: Motion and Heat by L. Landau and A. Kitaigordsky. The aim of the book is to provide the reader in a simple and intelligible way with a clear conception of basic ideas and most up-to-date achievements in modern physics. The reader is offered an acquaintance with phase states of matter, with structure and properties of liquid and solid solutions, with chemical reactions and law of conservation of energy at the molecular level.  This book of the series Physics for Everyone, as well as the two subsequent books (Electrons, and Photons and Nuclei), continues presentation of fundamentals of physics.

The book was written for a wide range of readers, from those making first acquaintance with physics to university graduates, non-experts in this particular field. It can be well employed as a teacher’s aid for enlivening the teaching of physics at the school level.

In the preface they say:

The book is devoted mainly to a study of the structure of matter dealt with from various aspects. The atom, however, remains, for the time being, indivisible particle conceived by Democritus of ancient Greece. Problems related to motion of molecules are considered, of course, because they are the basis of modern knowledge of thermal motion. Attention has been given, well, to problems concerning phase transitions.

The book was translated from the Russian by Martin Greendlinger and was first published by Mir in 1978.

The book has following chapters:

As with the cover I have tried to remake it and here is the result.

Next post will be Book 1 in Physics for Everyone, namely Physical Bodies. 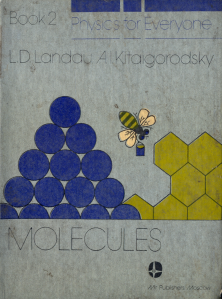 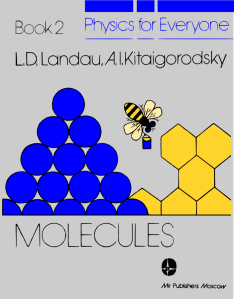 Update: All the books in the Physics for Everyone series are now up:

Physics for Everyone – Motion and Heat here.

10 Responses to Physics for Everyone – Book 2 – Molecules