We now come to a book on genetics titled Why I’m Like Dad? by N. Luchnik. 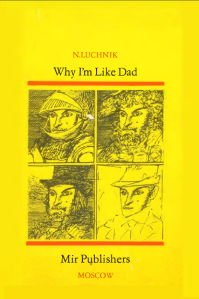 Why do cats give birth to kittens, lions to lion-cubs, and rabbits to baby rabbits?
Why do human children, too, not only outwardly look like their parents, but also resemble them in character and disposition?
Why are twins as like as two peas or quite different?
Why are some babies born monsters? Can man remake animals and plants to order?
Questions like those are the field of this book. It describes the quests that led to major discoveries in genetics, and the obstacles encountered by researches, and tells about the scientists who study heredity, and how to change it. The author, a prominent biologist himself, takes the reader to research laboratories, farm fields, and hospitals, opening up before him the whole broad field of modern genetics. Why I’m Like Dad received the award of the USSR Society for the Dissemination of Scientific Knowledge (Znaniye) for the best popular science writing in 1967.

Update August 2020: There is a Spanish version available (all credits to IA user danni229)

Link to the Spanish version

The Great Mystery 13
Vesicles and Cells 15
The Academy Sponsors a Contest 19
Academies and Science 24
Johann Becomes Gregor 27
Laws of Nature 31
The Game of Dice 35
A Mad Hypothesis 39
The Abbot of St. Thomas’ Monastery 44
Sixteen Years On 48

Like in a Film 52
The Dance of the Chromosomes 55
The Halving Process 57
Hypothesis Becomes Theory 59
The Vinegar Fly 62
The Map of Heredity 66
Show Me a Gene 70
How Does It Happen? 77

THE LAWS OF VARIETY 81

MOLECULES THAT REPRODUCE THEMSELVES