Science for Everyone – Our Planet – The Earth

The book in this post is titled Our Planet – The Earth by A. V. Byalko. The book is wonderfully written and well illustrated. This is a book which mingles with a lot of disciplines and presents us with a better understanding of all the phenomena concerning Our Planet – The Earth: right from the astronomical to terrestrial. The mere breadth of the subject that this book covers is amazing, our path in space, other celestial bodies, the sun its working and interiors, Earth’s  atmosphere its oceans and finally the climate on the Earth. 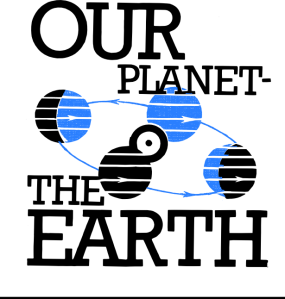 The back cover of the book says:

The physical principles underlying the global phenomena that occur on the Earth and other planets in the solar system are presented in away accessible to older pupils at school.The similarities between the phenomenon the various planets are due to the nature of their common star, the Sun. The Sun’s structure,the nuclear reactions proceeding within its core,and the stability of its nuclear fires take up an entire chapter. This book will help answer many of the questions often asked, such as where does the wind come from,what are clouds made of, what are ocean currents, and what affects the Earth’s climate.

This wonderful book in the Science for Everyone series which is presented in this post was first introduced to me by anish.dot, thanks to him. The book was translated from the Russian by Yu. M. Taube and the Russian edition was edited by Ya, A. Smorodinsky [we have a book by him in the SFE series Temperature] and was first published by Mir in 1987.

The contents are as under

Chapter 1. The Earth’s Path in Space and Time 8

8 Responses to Science for Everyone – Our Planet – The Earth