A Simple Non-Euclidean Geometry And Its Physical Basis – Yaglom

In this post, we will see the book A simple non-Euclidean geometry and its physical basis: an elementary account of Galilean geometry and the Galilean principle of relativity by I. M. Yaglom. 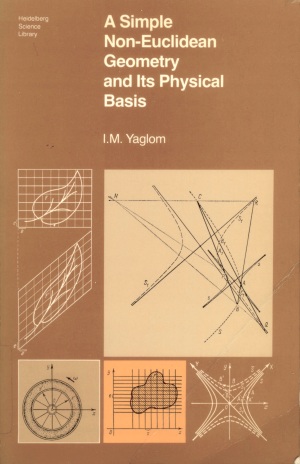 From the preface (with some added notes)

Why study non-Eucliean geometries?> The principal reason for the interest in hyperbolic geometry is the important fact of “non-uniqueness” of geometry; of the existence of many geometric systems. The non-uniqueness of geometry sheds new light on basic features of mathematics; on the role of idealization in science; on deductive knowledge (Aristotle’s “inferential knowledge”), i.e., knowledge deduced from a definite system of axioms; on the role of axiom systems in mathematics, and on the requirements that must be satisfied by such systems; and on the relation between abstract “mathematical geometry” and the “physical geometry” concerned with certain properties of physical space. The non- uniqueness of geometry already justifies the effort to dislodge from the minds of prospective high school teachers the notions that Euclidean geometry is “innate,” “unique,” “natural,” or “god-given.”

All for hyperbolic geometry> too much attention is paid in scientific and popular-scientific literature to hyperbolic geometry (for example, a number of Russian books and countless papers are concerned with as special a problem as the theory of geometric constructions in the hyperbolic plane; this in spite of the fact that the problem clearly does not merit so much attention) and too little to the remaining “non-Euclidean geometries of Klein.” The aim of this book is to help redress this imbalance by presenting a widely accessible account of one of these geometries, namely the geometry of the two-dimensional manifold of “events” (x,t) (x is the coordinate of a point on a line and t is time) whose “motions” are the Galilean transformations of classical kinematics.

Galilean Geometry and its significance> In fact, the geometry presented in this book — Galilean geometry — is the simplest of all Klein ian geometries; in many respects it is simpler than Euclidean geometry. The main distinction of this geometry is its relative simplicity, for it enables the student to study it in relative detail without losing a great deal of time and intellectual energy. Put differently, the simplicity of Galilean geometry makes its extensive development an easy matter, and extensive development of a new geometric system is a precondition for an effective comparison of it with Euclidean geometry. Also, extensive development is likely to give the student the psychological assurance of the consistency of the investigated structure. Another distinction of Galilean geometry is the fact that it exemplifies the fruitful geometric idea of duality. And last, but certainly not least, a major merit of the geometry presented in this book is that it illustrates the important connection between Klein’s Erlanger Programm and the principles of relativity, and sheds additional light on Klein^s conception as well as on the role of the principles of relativity in physics.

Whom is the book for?> The present book, with its many possibly interesting but nonessential details, is intended for high school seniors, mathematics teachers, and students and lecturers in universities and teachers’ colleges, but is not meant to be a blueprint for the reform of the curriculum of teachers’ colleges. At the moment, we are certainly not ready for such a reform. The evaluation of the questions raised above requires extensive knowledge of the geometries associated with the principles of relativity of Galileo and Einstein, whereas apparently this is the first popular scientific book to analyze in detail the geometry associated with the Galilean principle of relativity.

What is in the name?> Finally, the now popular name “Galilean geometry” is historically inaccurate: Galileo, whose works date from the beginning of the 17th century, did not in fact know this geometry, whose discovery was necessarily preceded by one of the greatest intellectual triumphs of the 19th century — the emergence of the idea that many legitimate geometric systems exist. A more accurate name would be “the geometry associated with the Galilean principle of relativity.” This name is too long for repeated use and that is why we have decided, somewhat reluctantly, to use the name “Galilean geometry.” This name is partially justified by the brilliant clarity and completeness with which Galileo formulated his principle of relativity, which leads directly to the (non -Euclidean!) geometry considered in the present book.

The development is primarily guided by the analogies with the concepts of Euclidean geometry, but the reader is reminded periodically of the mechanical meaning of the geometry in terms of motions on a straight line.

The Lorentz transformations of special relativity and the Minkowskian plane are developed in a separate chapter, with an illuminating section on the Galilean plane as a limiting case of the Euclidean and Minkowskian planes.

The book concludes with three appendices describing the nine geometries-here called Caley-Klein geometries-obtained by combining the three metrics, elliptic, parabolic and hyper- bolic on the (real or projective) line with the three dual metrics on the pencil of lines.

While the exposition is elementary,  a good deal of knowledge would be needed before any but the most exceptional reader can appreciate the content of these sections. This masterfully lucid book would make an excellent starting point for an undergraduate seminar in geometry.

The book was translated from the Russian by Abe Shenitzer
with the Editorial Assistance of Basil Gordon.

Chapter I. Distance and Angle

3. Distance between points and angle between lines 33

6. Proofs of the principle of duality 67

7. Definition of a cycle; radius and curvature 77

8. Cyclic rotation; diameters of a cycle 91

9. The circumcycle and incycle of a triangle 104

10. Power of a point with respect to a circle or cycle; inversion 1 17

13. Galilean geometry as a limiting case of Euclidean and Minkowskian geometry 201

Supplement B. Axiomatic characterization of the nine plane geometries 242

Answers and Hints to Problems and Exercises 294