This is a book of folk tales and fables of the peoples of the Soviet Far North, the Chukchi Nentsi, Eskimos and others, in which all the characters are animals.
…
According to an ancient northern custom, people gathered and made merry after a lucky hunt, or in winter when snowstorms raged and they were forced to wait for calmer weather. This was the time for story-telling.

The best story-tellers were always greatly respected, since these peoples had no written books. A story-teller had to know many fables and legends by heart. Besides, he had to tell a story well, to make it interesting. He also had to have a pleasant voice. The story-teller was treated to the best food. Many people gathered round to hear his tales. An Eskimo hunter named Kivagme was one of these fine story-tellers whose name has come down to us. Several of his tales have been included in this book.
…
The tundra and taiga have always been full of birds and beasts. This is why so many stories of the North are about animals and why the animals in them resemble humans in every way: they live in tents, ride in reindeer sleds and cross rivers in boats.

These stories praise honesty, courage and common-sense and disapprove of idle talk, bragging and, especially, laziness. All were handed down from generation to generation.

This edition has been illustrated by Yevgeny Rachov, People’s Artist of the RSFSR, known for his many fine illustrations of folk tales and
children’s books.

The book was translated by Fainna Solasko and the wonderful illustrations are by Illustrated by Y. Rachov. Malysh publishers first printed the book in 1981. 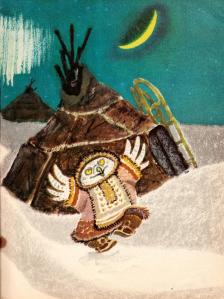 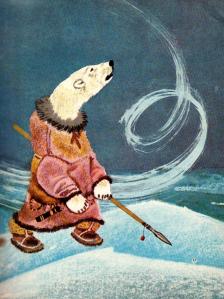 Many thanks to Guptaji for this book.

2 Responses to Kutkha – The Raven