In the Little Mathematics Library series we now come to Method of
Coordinates by A. S. Smogorzhevky. 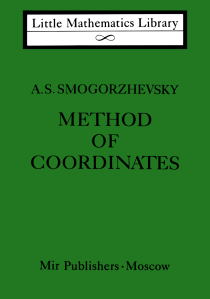 The booklet deals with a fundamental method of analytical
geometry and its ability to describe geometrical figures
through equations. This method permits geometrical study
and solution of geometrical problems by algebraic means,
thus making a visual representation of complex spatial
configurations superfluous. Considerable attention has been
devoted to the question of representing geometrical figures
through equations, which is often difficult for those who
being to study the method of coordinates.
Detailed examples have been given to illustrate the
application of the method. The booklet is intended for senior school chidlren and all those interested in mathematics.

The book was translated the Russian by Ram S. Wadhwa and was
first published by Mir in 1980.

You can get the Magnet/Torrent links here.

3 Responses to Little Mathematics Library – The Method of Coordinates