After seeing some heavy stuff on Relativistic Theory of Gravitation (RTG) in the last post, we come to yet another book on General Relativity (GR) which is titled Space Time Gravitation by Yu. Vladimirov, N. Mitskiévich, J. Horský. 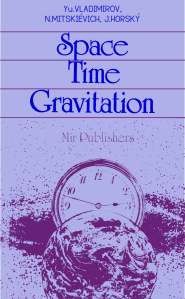 This book is basically divided into three sections which are aptly titled Yesterday, Today and Tomorrow and they discuss the historical aspects, current situation and future advances respectively regarding GR. The back cover of the book says:

An historical survey of our ideas about space, time and gravitation. In three chapters, the authors consider how space and time were perceived from ancient times to the present (as marked by the publication of Einstein’s theory of relativity) how they are now perceived, and ﬁnally how this ﬁeld of mathematics and physics might develop in the future. Although there are many presentations of our current understanding of this subject on the market, the topics covered in the second chapter of the book are not those usually examined. However, the main difference between this and other
popularizations is the third chapter, in which the authors try get to grips with subjects such as cosmological singularities, generalizations of Einstein’s gravitational theory, the quantization of gravitational ﬁelds, and the dimensionality of space-time.

Written for students and professionals specializing in
physics or related sciences.

The book was translated from the Russian by A. G. Zilberman and edited by F. I. Fedorov. This book was first published by Mir in 1987.

The final section of the book (Conclusions) has a short poem written by one of the authors (NVM) based on a poem by Frederich Schiller (Ode to Joy):

From the depths of gravitation
Which makes sober thought so dense,
I would rush to sweet temptation,
A search for final evidence!
There I see its sheen all-winning,
There I hear its singing strings!
I should be at ‘world’s beginning,
If  I had a pair of wings.

Congruences bring News Functions
With derivatives of Lie,
And I am so very anxious
To trace the tunes of theory.
‘Tween the thicket of equations
Exact solutions bloom and grow
Which in deep intoxication
Physicists attempt to know.
O it ever must be summer
There in Newman’s Heavenly Space;
All is full of light cones’ glamour,
Their null lines my dreams embrace.
But I fear the Killing-vector
‘Which grows light-like sans remorse.
Black holes spring up, thirst and hector,
With a crushing tidal. force.

New ideas I feel in motion-
Still, the apparatus fails …
Forward, friends! Forget your caution!
Our souls will fill our sails!
With our faith and firm persistence
(Else our pledge the gods refuse)
Can we cross the rocky distance
To the Holy Land of Truth,

Chapter ONE. YESTERDAY. The Evolution of the Space and Time as Concepts. The Main Steps Towards the General Theory of Relativity 11

Chapter TWO. TODAY.
A Review of the Basic Results of Modern Relativity Theory 51

2.1. The Principle” of Equivalence and Gravitational Redshift 51
2.2. Schwarzschild’s Space-Time 56
2.3. Perihelion Advance and the Solution of Mercury’s “Abnormal” Precession 64
2.4. Deflection of Light by Gravitational Fields 67
2.5. Gravitational Lenses 72
2.6. Space-Time Around Rotating Bodies 79
2.7. Dragging in the Kerr Field 87
2.8. Reference Frames in the General Relativity 92
2.9. Study of the Universe as a Whole (Cosmology) 103

Chapter THREE. TOMORROW.
Modern Problems in the Theory of Gravitation. The Prospects for the Study of Space and Time 111