In this post we see book titled The Relativistic Theory of Gravitation by A. A. Logunov and M. A. Mestvirishvili.If you think the title is a bit scary, then it is. Without a proper background in General Relativity (GR) and associated subjects (tensor calculus, etc.) this book is not readable. The topics are mostly at advanced level and already assumes that the reader is familiar and well acquainted with the subject. In other words this is not the first  book to be  read on the subject. It is a rigorous presentation of a gravitational theory which differs from results of the Einstein’s version of General Relativity. 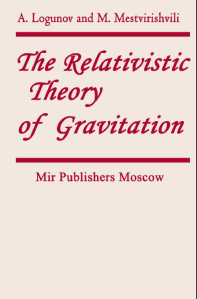 This book presents the authors’ Relativistic Theory of Gravitation

In this book we give a detailed exposition of the relativistic theory of gravitation or RTG, developed in Logunov, 1986, Logunov and Mestvirishvili 1984 , 1985a , 1985b, 1986b , Vlasov and Logunov, 1984, an d Vlasov , Logunov, and Mestvirishvili, 1984 . In these works RTG bas been built unambiguously, using as a basis the relativity principle, the gauge principle, and the geometrization principle.The gravitational field is constructed as a physically in the spirit of Faraday and Maxwell, and this field has energy, momentum, and spins 2 and 0. RTG revives the concept of a classical gravitational field that no choice of reference frame can destroy since it is a material substratum. The gauge principle is formulated on the basis of the local infinite dimensional non-commutative group of super-coordinate transformation.

The theory considered here rigorously obeys the laws of conservation of energy momentum and angular momentum for matter and gravitational field taken together. It also describes the entire body of gravitational experiments. We show that Einstein’s formula for gravitational waves, (15.56 ),  follows directly from the theory. In analysing the evolution of the universe, RTG concludes that the universe is infinite and “flat” and predicts a large “latent” mass in it. This “latent” mass exceeds the observable mass of the universe by a factor of 40.

We also show that in general relativity, GR, there are no fundamental laws of conservation of energy -momentum and angular momentum of matter and gravitational field taken together, with the result that the inertial mass defined in GR is not equal to the active gravitational mass. We have established that GR gives no definite predictions concerning gravitational effects. Finally, in GR the gravitational field is not a physical field possessing an energy-momentum density. Consequently, Einstein’s formula (15.56) for gravitational waves does not follow from GR.

The book was translated from the Russian by Eugene Yankovsky and was first published by Mir in 1989.

Note: The scan quality is poor (though file size is large) maybe 100 dpi or less. OCR is not reliable and the text is barely readable at times. This is especially true when there is a lot of tensor notation. See sample below. Maybe we should LaTeX it! If anyone has access to a better link please post the link. 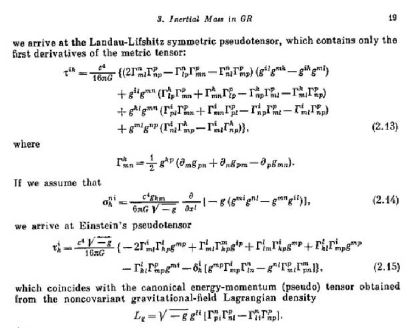 1. Critical Remarks on the Principle of Equivalence 14

2. Energy Momentum Pseudo-tensors of the Gravitational Field in GR 17

5. Energy-Momentum and Angular Momentum  Conservation as related to geometry of Space-Time  30

9. Relationships between Canonical Energy-Momentum Tensor and the Hilbert Tensor 53

10. The Gauge Principle and Uniqueness of RTG Lagrangian 57

11. A Generalization of RTG Systems of Equations 62

12.1 The field of a spherically symmetric object 66

12.2 The exterior axisymmetric solution for a spinning mass 77

14. The Gravitational Field of a Nonstatic Spherically Symmetric Object in RTG. Birkhoff’s Theorem 96

18. RTG and Solar System Gravitational Experiments. Ambiguities in the prediction of GR 136

18.1 Equality of gravitational and inertial masses in RTG 136

18.2 The equations of motion of a test body along a geodesic in Sun’s gravitational field 141

18.3 Deflection of light and radio waves in Sun’s gravitational field 143

18.9 GR and gravitational effects in the solar system. Conclusions 165

19. Post-Newtonian integrals of motion in RTG 165

20. Do extended objects move along geodesics in the Riemann Space-Time? 170

20.2 The equation of motion of centre of mass of an extended object 178

20.5 Deviation of the motion of Earth’s centre of mass from the reference geodesic 183

20.6 The law of motion of an electrically charged test body 184

20.8 A formula for the strength of the compensating electric field 187

20.9 Studying the motion of Earth’s centre of mass by gravimetric experiments 189

20.10 Studying the motion of Earth’s centre of mass by tiltmeters 190

20.11 Studying the motion of Earth’s centre of mass in an experiment involving and artificial Earth satellite192

20.12 Effects associated with presence of a preferred  Reference Frame  195

20.13 Effects associated with anisotropy with respect to the centre of mass of the Galaxy 196

21. The Peter-Mathews coefficient in RTG 197

4 Responses to The Relativistic Theory of Gravitation – Logunov, Mestvirishvili