We now come to The Monte Carlo Method by I. M. Sobol in the Little Mathematics Library series. The book has a random number table as one of the appendices, which is sort of out dated, when we have access to computers so easily. 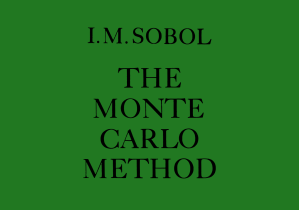 In the Preface the author says:

The basic aim of this book is to prompt the specialists in various branches of knowledge to the fact that there are problems in their fields that can be solved by the Monte Carlo method.

The book was translated from the Russian by V. I. Kisin and was first published by Mir in 1975. This book was also published as Popular Lectures in Mathematics by University of Chicago in 1974, and this edition was translated by by Robert Messer, John Stone, and
Peter Fortini. You can get the LML version here.

The table of contents for (LML edition) is as follows: