In this post, we will see the book Miracles on Wheels: A Book for Inquiring Minds by Anatoly Markusha.

This book has been written not only for budding engineers and mechanics: it is addressed to anyone who is thinking of becoming closely involved with machines and technology at any level, to anyone who is interested in the history of technology, or who likes to solve absorbing puzzles and make useful things with their own hands. In short, Miracles on Wheels is a book for inquiring minds.

The title of the book was chosen because our world literally runs on wheels, the wheels of cars, lorries and trains, and the wheels turning inside millions of machines. Wheels have a complex and dramatic history, a history which is also the history of technology.

Anatoly Markusha has written more than fifty books, and he never tires of telling young people about technology’s past and present, about its development, its achievements and the prospects for its future. He always tries to help the young reader share his enthusiasm, and he explains how to master technology and find a common language with machines.

Before he began writing books, Anatoly Markusha had been a reporter for an evening newspaper, he was a fighter pilot during the war and he gained a qualification as a test-pilot. After his health forbade him to continue flying, he began working as a mechanic. It was then that he started his first book, entitled You Have Take-off.

He has now been writing books for over twenty years and his works have been published in over a dozen languages, both in the Soviet Union and abroad, with a total output of around ten million copies.

And always, in every book, the author returns to his main theme of Man and Machine. For him the world of technology is not merely a world of amazing machines, it is also a world of restless and thinking people who make great demands both on themselves and on others. The author calls on young people not to delay, not to put off their entry into this remarkable world. And his books help his young readers to make their choice and to find their way in an active and interesting life.

There are some remarkable drawings inside the book. Prints of many of these adored my work desk for many years. 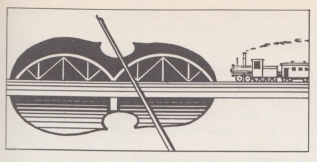 And of course the coloured drawings at the chapter headings are awesome: 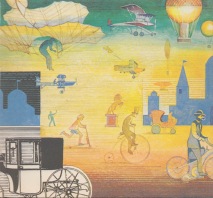 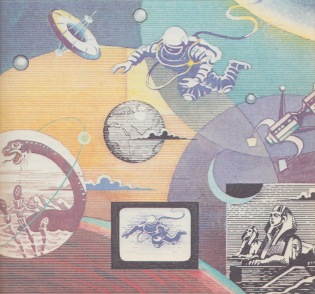 The book was translated from the Russian by Graham Whittaker and the amazing illustrations are by Boris Lavrov. The book was first published by Raduga in 1987.

Note: This was one of the first books I owned. I think I got it from a used bookstore when I was still in school. This is one amazing book especially if you read it in your formative years. The exercises and problems make you think out of the box for solutions. And advises on a variety of things concerning a thinking mind. Also, design thinking explored in various areas.

About This Book and Its Author 8

Three “Notches” for My Memory 10
An Unexpected, Though Quite Relevant, Digression 14
A Definition from an Old Dictionary 17
A Little Something from the Biography of a Most Useful Machine 22
For Those Who Are Not Convinced 26
Something to Think About, Problems to Solve 28
Some Useful Hints 31
Dates on the Calendar 36

Something Quite Clear, and Something Not So Clear 40
The Indispensable Language 44
In Praise of Our Oldest Teacher 52
Something to Think About, Problems to Solve 56
Some Useful Hints 59
Dates on the Calendar 63

Two Unforgettable Encounters 66
And If We Come Down to Earth? 71
Something to Think About, Problems to Solve 79
Some Useful Hints 82
Dates on the Calendar 85

A Few Particulars About an Engineer’s Character 90
Something to Think About, Problems to Solve 105
Some Useful Hints 107
Dates on the Calendar 110

What Do You Know About Charles Goodyear? 116
How to Test Yourself, How Not to Make a Mistake? 120
The Melancholy Boy with the Large Album 124
Something to Think About, Problems to Solve (Answers) 131
Some Useful Hints 135
Dates on the Calendar 139

The Uninvited Sequel to an Unexpected Meeting 142
A Sense of Time, an Ability to Foresee, and a Readiness to Fight 146
Something to Think About, Problems to Solve (Answers) 151
Some Useful Hints 153
Dates on the Calendar 157

A Matter of Getting the Job Done. Anywhere, Any Time. On Your Own, or with Others 160
It Won’t Get You a Monument, but… 164
The Last of the Mohicans 168
If You Work at It, then Everything’s Possible 172
Something to Think About, Problems to Solve (Answers) 176
Some Useful Hints 178
Dates on the Calendar 181
When Engineers Get Together 183
A Short Glossary of Technical Terms 192

2 Responses to Miracles on Wheels – Markusha