In this post, we will see the book Measure, Lebesgue Integrals and Hilbert Space by A. N. Kolmogorov and S. V. Fomin. 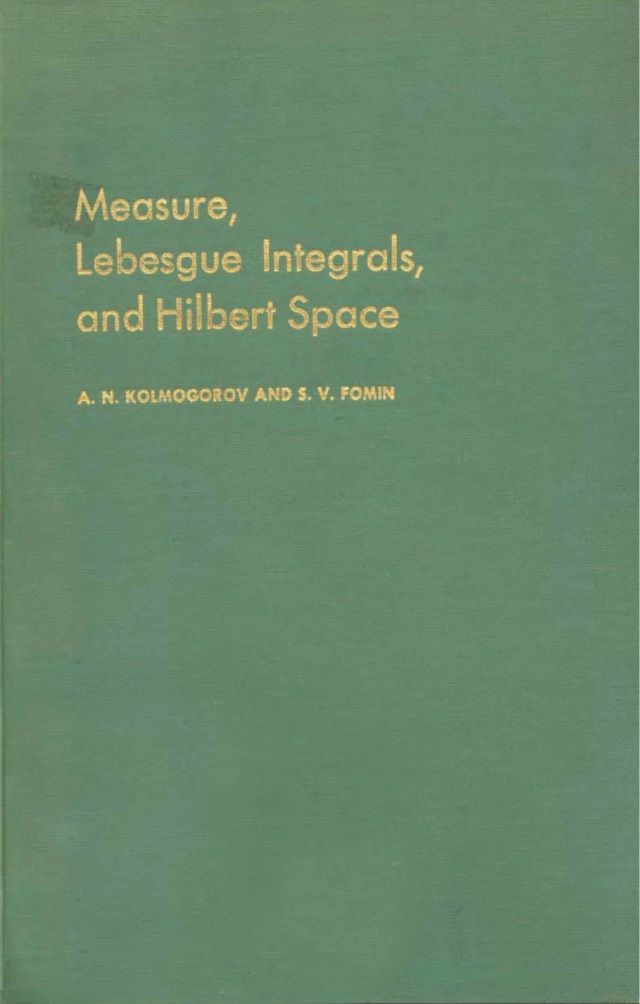 This publication is the second book. of the “Elements of the Theory of Functions and Functional Analysis,” the first book of which (“Metric and Normed Spaces”) appeared in 1954. In this second book the main role is played by measure theory and the Lebesgue integral. These concepts, in particular the concept of measure, are discussed with a sufficient degree of generality; however, for greater clarity we start with the concept of a Lebesgue measure for plane sets. If the reader so desires he can, having read §1, proceed immediately to Chapter II and then to the Lebesgue integral, taking as the measure, with respect to which the integral is being taken, the usual Lebesgue measure on the line or on the plane.

The theory of measure and of the Lebesgue integral as set forth in this book is based on lectures by A.N. Kolmogorov given by him repeatedly in the Mechanics-Mathematics Faculty of the Moscow State University. The final preparation of the text for publication was carried out by S. V. Fomin.

The two books correspond to the program of the course “Analysis III” which was given for the mathematics students by A. N. Kolmogorov. At the end of this volume the reader will find corrections pertaining to the text of the first volume.

3. Measures on Semirings. Continuation of a Measure from a Semiring to the Minimal Ring over it. 26

6. Lebesgue Continuation of Measure, Defined on a Semiring with a Unit. 39

7. Lebesgue Continuation of Measures in the General Case. 45

10. The Lebesgue Integral for Simple Functions. 61

11. General Definition and Basic Properties of the Lebesgue Integral. 63

13. Comparison of the Lebesgue Integral and the Riemann Integral. 75

14. Direct Products of Systems of Sets and Measures. 78

15. Expressing the Plane Measure by the Integral of a Linear Measure and the Geometric Definition of the Lebesgue Integral. 82

Functions Which Are Square Integrable

19. Mean Convergence. Sets in L2 which are Everywhere Complete. 97

The Abstract Hilbert Space. Integral Equations with a Symmetric Kernel

29. Integral Equations with a Symmetric Kernel. 135

Additions and Corrections to Volume I 138