The World Is Built On Probability – Tarasov 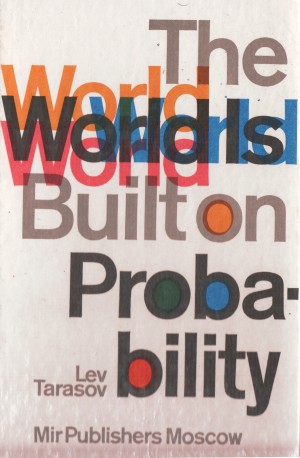 We now come to much awaited book by Lev Tarasov The World Is Built On
Probability.

And this post also is the 200th post on Mirtitles!
Thanks to all who helped and encouraged!!

From the Back Cover:

This text is divided into two major parts.  The aim of the first part
is to convince the reader that the random world begins directly in his
or her own living room because, in fact, all modern life is based on
probability. The first part is on the concept of probability and
considers making decisions in conflict situations, optimizing queues,
games, and the control of various processes, and doing random
searches.

The second part of this text shows how fundamental chance is in nature using the probabilistic laws of modern physics and biology as
examples. Elements of quantum mechanics are also involved, and this
allows the author to demonstrate how probabilistic laws are basic to
microscopic phenomena. The idea is that the reader, passing from the
first part of the book to the second one, would see that probability
is not only around us but is at the basis of everything.

The Russian edition ran into 230,000 copies and is sold out.

YOU WON’T REGRET READING THIS BOOK

The book was translated from the Russian by Michael Burov and was
first published by Mir Publishers in 1988.

Thanks to Karen for getting this book from Amazon of Amerika (and I had to pay heftily in U$D, but that’s okay, I think, for a book like this). It is pretty ironic that we have now to get Soviet books from Amerika by paying in U$D.

Now, you will be seeing ads in the posts, by WordPress, which I do not like personally. For this particular reason, we may shift to a different server. They are asking for 30 U$D per year to keep it ad-free. With some more money, I think it is better to migrate to our own.

Note the files on Internet Archive may have different parameters.

Get the book here or here.

11 Responses to The World Is Built On Probability – Tarasov