Chemical Elements: How They Were Discovered

We now come to another book by D. N. Trifonov and V. D. Trifonov  on history of chemistry titled Chemical Elements: How They Were Discovered. 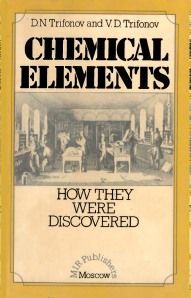 In this book we shall describe how the alphabet of chemistry has been designed and how the inquisitive mind of the researchers discovered new chemical elements, one after another.

Each element has its own “biography”, interesting in its own way. The history of the discovery of many elements has not yet been exhaustively studied and quite a number of unclear issues should be cleared by historians of chemistry. Perhaps you will be one of them…

This is again one of the first books in my collection, and I had stumbled on it accidentally while looking for some other book when I was in school. We do know of translations in Hindi and Bengali. I do not know if there are any other translations of this book, any inputs in this regard would be great.

The book was translated from the Russian by O.A. Glebov and I.V. Poluyan and was first published by Mir in1982 and was reprinted in 1985.

5 Responses to Chemical Elements: How They Were Discovered