Yakov Perelman – Algebra Can Be Fun

We now come to Algebra can be fun by Yakov Perelman. This book has been translated into many Indian Languages. As with other Perelman books this book also has many editions. 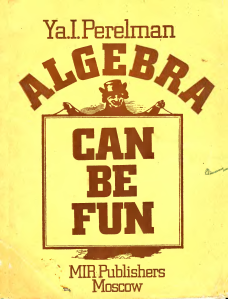 This is not an easy-reading text on algebra for beginners.
Neither is it a manual. It is a book for free reading. It is
designed for a reader with some knowledge of algebra, even
though half mastered and perhaps half forgotten. The
present text hopes to help the reader recall such haphazard
knowledge and polish it up, the aim being to fix certain
facts in his mind. It is meant to develop in the reader a
taste for algebra and problem-solving, and also excite him
to dip into algebra textbooks and fill in the blanks in his
knowledge.

To make the subject more attractive I have made use of
a variety of tools: problems with intriguing plots to excite
the reader’s curiosity, amusing excursions into the history
of mathematics, unexpected uses that algebra is put to in
everyday affairs, and more.

This particular edition was edited and supplemented by V. G. Boltyansky and rranslated
from the thirteenth Russian edition by George Yankovsky ans was published by Mir in 1979.

From the Author’s Preface to
the Third Edition 5
Chapter I. The Fifth Operation of Mathematics 11

The Fifth Operation 11
Astronomical Numbers 12
How Much does the Earth’s Atmosphere Weigh? 14
Combustion Without Flames or Heat 15
The Changing Weather 16
A Combination Lock 17
The Superstitious Cyclist 19
The Results of Repeated Doubling 20
Millions of Times Faster 21
Ten Thousand Operations per Second 25
The Number of All Possible Chess Games 28
The Secret of the Chess Machine 29
The Biggest Number Using Only Three Twos 32
Three Threes 33
Three Fours 33
Three Identical Digits 34
The Biggest Number Using Four Ones 35
Four Twos to Make the Biggest Number 36

Chapter II. The Language of Algebra 38

Chapter III. As an Aid to Arithmetic 92

The Most Ancient Problem Dealing with Progressions 195
Algebra on Squared Paper 196
Watering the Garden 198
Feeding Chickens . 198
A Team of Diggers 200
Apples 201
Buying a Horse 202
Paying for the Wounds of a Soldier 204

16 Responses to Yakov Perelman – Algebra Can Be Fun