We now come to another jewel of a book titled Celestial Mechanics by Y. Ryabov. This book discusses many concepts of celestial motion including planetary and lunar motion, perturbations, satellites, two body-problem etc. 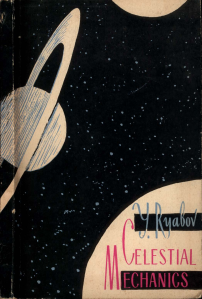 The aim of this book is to tell the reader how the law of universal gravitation was discovered and how, on the basis of this law, the motions of celestial bodies are studied. We will learn that the movements of the most distant stars and the falling of bodies to the ground and the flight of man-made satellites of the earth, and of cosmic rockets too, are all subject to the same law of gravitation.

Towards the end we shall deal in brief with the nature of gravitation.

The book was translated from the Russian by G. Yankovsky. This edition was published by the Foreign Languages Publishing House in 1959.

You can get the book from the Internet Archive.

Introduction 5
1. Ancient Conceptions Concerning the Motions of the Sun, Moon, Planets and Stars 6
2. The Geometry of Planetary Motions from Copernicus to Kepler 13
3. The Discovery of the Law of Gravitation 30
4. The Attraction of Material Bodies of Different Shapes 41
5. Experimental Detection of Attraction between Material Bodies on Earth 46
6. Newton’s Law— the Theoretical Basis of Celestial Motion 49
7. Celestial Motion and the Two-Body Problem 57
8. The Concept of Perturbed Motion. Celestial Mechanics and Practical Astronomy 63
9. Ways of Describing Perturbed Motion. The Variational Orbit 67
10. The Problem of Motion in the Solar System 69
11. Successive Approximations in the Theory of Motion of Heavenly Bodies 74
12. The Discovery of Neptune 84
13. Periodic and Secular Perturbations 85
14. Numerical Methods in Celestial Mechanics 93
15. Satellite Theory 96
16. Artificial Earth Satellites and Their Motion 99
17. The Motions of Asteroids 110
18. Planetary Rotation. 114
19. Problems of Qualitative Celestial Mechanics 126
20. Stellar Motions and the Law of Gravitation 135
21. What is Gravitation? 141
Appendix 149