The Propagation of Electromagnetic Waves in Plasmas – Ginzburg

In this post, we will see a book by Vitaly Ginzburg titled The Propagation of Electromagnetic Waves in Plasmas. 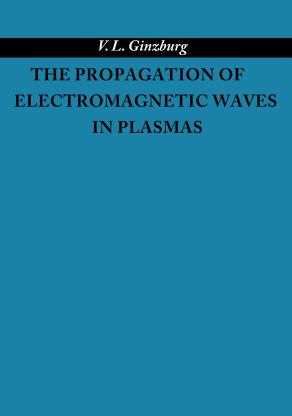 In recent years increasing attention has been given to plasmas, plasma dyna­ mics, and yarious processes occurring in plasmas. An important problem in this field is the study of the propagation in plasmas of electromagnetic waves of various types (radio waves, plasma waves, hydromagnetic waves, etc.). A particular case of this is the behaviour of a plasma, i.e. an ionised gas, in an electromagnetic field which is uniform in space but variable in time.
The present book deals with such problems, which are of importance in the theory of radio wave propagation in the Earth’s ionosphere, in radio astro­ nomy and astrophysics, and in the physics of laboratory plasmas.
The study of wave propagation in plasmas involves a great number of different problems and various forms of these problems. The relevant litera­ture is very extensive, especially if kindred problems of plasma physics are included. It must be emphasised that no attempt is made here to review this literature. The author has tried rather to discuss as simply as possible some of the fundamental results, in particular for problems which he himself has helped to investigate. Thus neither the exposition of the material nor the list of references can lay claim to completeness. However, there seems to be no book, Russian or other, in which wave propagation in plasmas is discussed in even the amount of detail given here.

In order to assist the reader and to make the book more useful for reference,
certain formulae have been repeated in different sections, and two sections are devoted to the collation of the principal results. Moreover, the list of references includes some original and review articles on subjects which arc discussed only briefly or not at all in this book. The most important problem omitted concerns the propagation of waves in the presence of statistical inhomogeneities.

I. The Fundamental Theory of Electromagnetic Wave Propagation in Plasmas 1

VIII. Non-linear Phenomena in a Plasma in a Variable Electro­ Magnetic Field 428

Appendix A. Electromagnetic Wave Propagation in an Anisotropic Dispersive Medium 461

Appendix B. the Conservation law and the Expression for the Energy Density in the Electrodynamics of an Ab­sorbing Dispersive Medium 477

Appendix C. the law of Conservation of Energy in the Electrodynamics of Media With Spatial Dispersion 496

1 Response to The Propagation of Electromagnetic Waves in Plasmas – Ginzburg