In this post, we will see the book Vector Analysis by  M.L. Krasnov, A.I. Kiselev,   G.I. Makarenko. 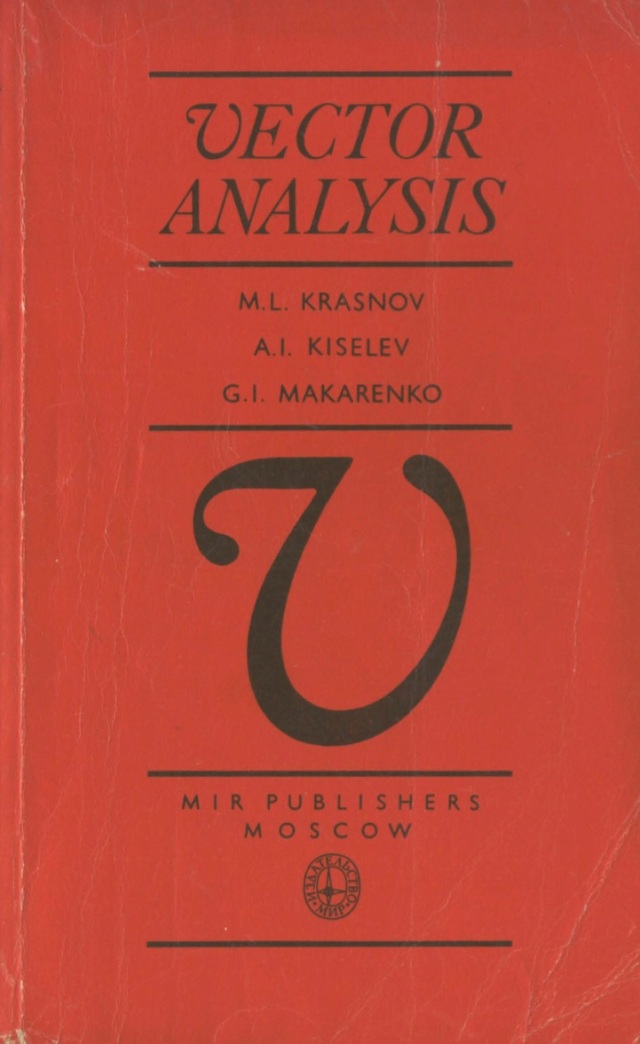 Each section starts with a brief review of theory and detailed solutions of a sufficient number of typical problems. The text contains 100 worked problems and there are 314 problems left to the student. There are also a certain number of problems of an applied nature that have been chosen so that their analysis does not require supplementary information in specialized fields. The material of the sixth chapter is devoted to curvilinear coordinates and the basic operations of vector analysis in curvilinear coordinates. Its purpose is to give the reader at least a few problems to develop the necessary skills.

The exposition in this text follows closely the lines currently employed at the chair of higher mathematics of the Moscow Power Institute.

The present text may be regarded as a short course in vector analysis in which the basic facts are given without proof but with illustrative examples of a practical nature. Hence this problem book may be used in a recapitulation of the essentials of vector analysis or as a text for readers who wish merely to master the techniques of vector analysis, while dispensing with the proofs of propositions and theorems.

This collection of problems is designed for students of day and evening departments at engineering colleges and also for correspondence students with a background of vector algebra and calculus as given in the first two years of college study.

The book was translated from the Russian by George Yankovsky and was first published by Mir in 1983.

CHAPTER IV. POTENTIAL FIELDS
See. 18. The criterion for the potentiality of a vector field t2t
See. 19. Computing a line integral in a potential field 124