Science for Everyone – The Greatest Speed

We now come to another one in the Science for Everyone Series. This one is all about c; The Greatest Speed, the speed of light by S. R. Filonovich. 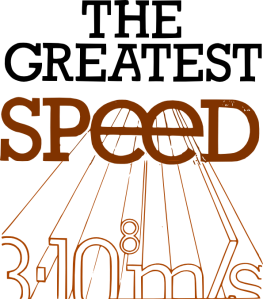 The book opens with a dialogue from Galileo’s book and opens up historical roots of the problem of light travel.

In the preface the author comments

This book covers the history of the determination of the velocity of light during the past three centuries. The problem originated in a seemingly abstract question: is the velocity of light finite or infinite? The answer was found in the 17th century, and the problems of measuring the light velocity has been luring scientists ever since. Step by step, the velocity of light was promoted from a commonplace number in optics to a fundamental constant playing a most important role in physics. Numerous experiments in the history of measuring this constant illustriously support Albert Einstein’s idea: science is not and will never be a completed book be-cause each essential success brings new questions, and with time every development reveals newer and deeper problems.

The reason why the determination of the velocity of light is still intriguing scientists lies in that the velocity of light in vacuum is a constant belonging to many branches of physics. The velocity of light, as it were, ‘unites’ these areas, thus substantiating convincingly the general philosophical concept on the unity of the world around us. However, the interest, in the history of this particular problem can be accounted for by not only the role of this constant in modern science.

The experiments conducted to measure the velocity of light contributed to the development of physics on the whole. Starting from the 17th century, these experiments show the progress of methods and techniques in physical experiments. Quite recently, when the Russian edition of this book has already been out of print (it ran into 150,000 copies), the velocity of light drew the attention of every experimenting physicist again: in late 1983, a basically new decision was adopted to define the metre, one of the most important physical units, and the velocity of light played the main role in the definition.

From the back cover:

The constant denoting the velocity of light in vacuum is encountered in every branch of physics, and this universality brings out the unity of the physical world. Although it is now over three hundred years since the constant was first defined, it yielded to scientific assaults only slowly, revealing as it did unexpectedly new phenomena. Its universality and the surprises that it threw up make any attempt to relate how the velocity of light came to be measured a minor history of physics. This book therefore explains the requisite science against the back-ground of the historical personalities involved. Intended for teachers and school pupils.

The book was translated from the Russian by Michael Burov and was first published by Mir in 1986.

Thanks to Gordon for bringing this book to my notice, thanks to gnv64 for this book.

The contents are as under:

Preface 5
Introduction 8
Chapter 1. The Origin of the Problem 10
Chapter 2. Astronomy Provides an Answer 32
Chapter 3. The Struggle of Theories 62
Chapter 4. The Enigmatic Constant 101
Chapter 5. The Many Velocities of Light 134
Chapter 6. The Velocity of Light and Material Motion 161
Chapter 7. The Multifarious Constant 213
Chapter 8. A Long Overdue Discovery 237
Chapter 9. In Quest of Precision 260
Conclusion 275

4 Responses to Science for Everyone – The Greatest Speed