Elements Of The Applied Theory Of Elastic Vibration – Panovko

In this post, we will see the book Elements Of The Applied Theory Of Elastic Vibration by Ya. Panovko. 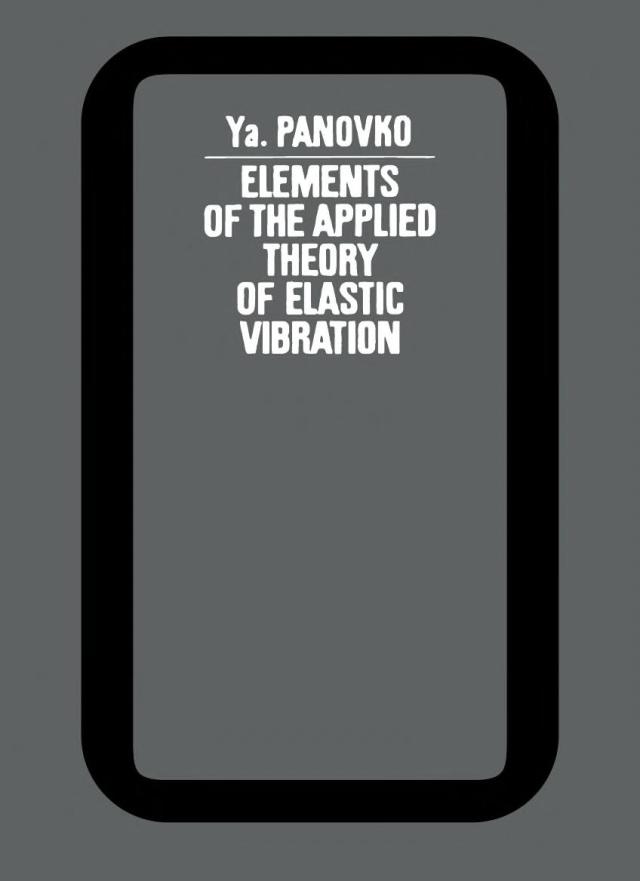 We may distinguish at least the following live sufficiently inde­pendent categories of vibratory processes differing in their nature:

free vibrations, i.e., vibrations which are performed by a mecha­nical system having no energy supply from outside if the system is disturbed from its position of equilibrium and then released;

critical states of rotating shafts and rotors which consist in a sudden increase in the deflections of their axes at definite speeds of rotation (or in definite ranges of speeds);

forced vibrations which result when the mechanical system is acted on by fluctuating external forces (driving forces);

parametric vibrations caused by periodic variations of the para­ meters of a system (for example, its stiffness);

self-excited vibrations, i.e., vibratory processes which are main­tained by constant sources of energy of a non-vibratory nature.

Each of these categories of vibratory processes is discussed in the appropriate chapter.

The book was translated from the Russian by M. Konyaeva and was published by Mir in 1971.

Many thanks to Akbar Azimi for providing the raw scan 2-in-1 page scans. We cleaned the book with OCR.

1. Number of Degrees of Freedom of an Elastic System. 11
2. Classification of Forces. 15
3. Methods for Setting Up Equations of Motion in the General Case. 22