In this post, we will see the book Linear Algebra And Multi Dimensional Geometry by
N. V. Efimov, E. R. Rozendorn 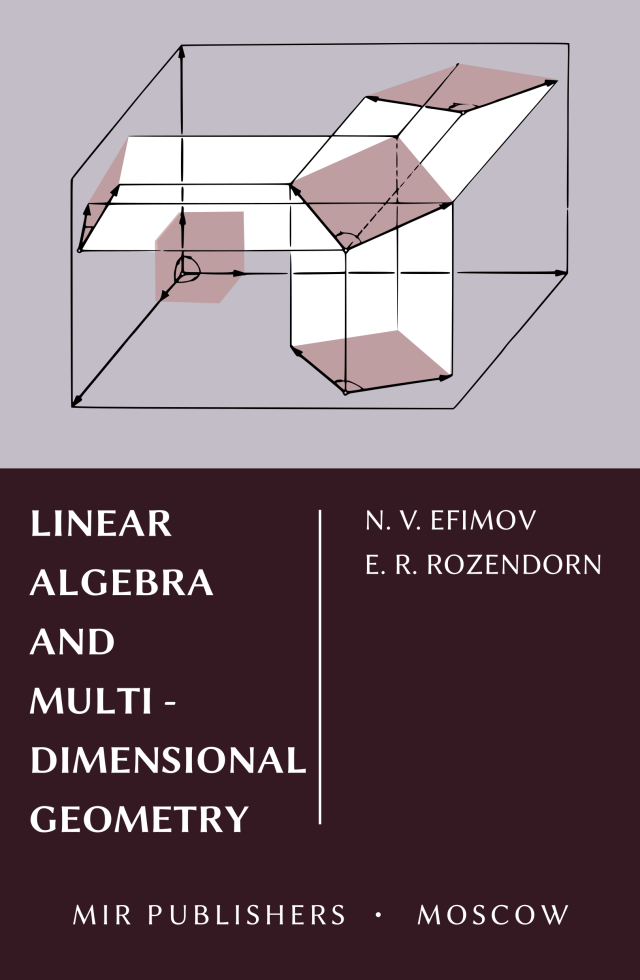 This book was conceived as a text combining the course of linear algebra and analytic geometry. It originated as a course of lectures delivered by N. V. Efimov at Moscow State University (mechanics and mathematics department) in 1964-1966. However, the material of these lectures has been completely reworked and substantially expanded. We have tried to bear in mind the requi­rements of other mathematical disciplines and also of mechanics and physics. We hope that all parts of the text will be useful. The only preparation required for this text can be given an a first- semester course of analytic geometry and algebra at the most ele­mentary level. All that is needed is a firm grasp of the elements of these subjects. For Chapter XII the student should be ac­quainted with projective transformations and the projective pro­perties of figures in the plane. Also, in Chapter X the reader may simplify his task by skipping Subsections 13 to 23 (Section 3) and Subsection 10 of Section 7. What is left of Chapter X can serve as a minimal algebraic basis for the theory of multidimensional in­tegration.
It may be noted in conclusion that the first five chapters already contain material with broad applications in mathematics, mecha­nics, and physics. These chapters, supplemented with some of the material of subsequent chapters, can be utilized in higher tech­nical schools with a more advanced mathematics curriculum.

The book was translated from the Russian by George Yankovsky and published by Mir in 1975.

Many thanks to shankar.leo for providing the scans and the pdf.

Note: I tried to optimise the file for size, but somehow the archive kept on rejecting for some error in the pdf. I could have tried a few more things, but didn’t get time for that, hence the delay in post. For now, hence this large file (~120M) was uploaded. This file is OCRed but without bookmarks and pagination.

Chapter VI. Groups and Some Applications

1. Groups and subgroups. Distribution of bases into classes
with respect to a given subgroup of matrices. Orientation 180
2. Transformation groups. Isomorphism and homomorphism of groups 186
3. Invariants. Axial invariants. Pseudoinvariants 191
4. Tensor quantities 197
5. The oriented volume of a parallelepiped. The discriminant tensor 201

Appendix 1. Proof of the theorem on the classification of linear quantities 467