In this post we will see Geochemistry for Everyone by Alexander.E.Fersman 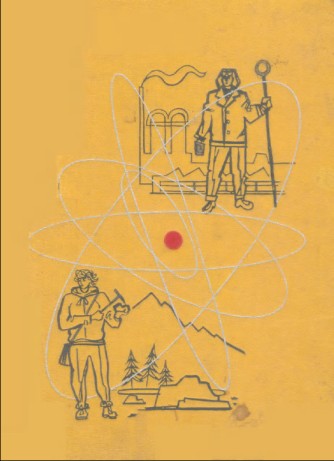 This book is neither a fascinating novel nor a scientific treatise. It is built according to a special plan. One after another its four parts pass from general problems of physics and chemistry to problems of geochemistry and its future. The reader who is not well versed in the fundamentals of these sciences must read this book slowly and carefully and, perhaps, even reread the difficult pages or those that are of special interest to him. But if the reader knows physics and chemistry he may skip separate parts of the book which deal with problems familiar to him; the author has endeavoured to make each essay complete and as far as possible independent of the other parts.The book is also of value to those who wish to get a deeper insight in to chemistry or geology. Students will find it very useful to read separate chapters while studying a general course of chemistry because each of these chapters may in large measure illustrate some particularly dry pages in the textbook of chemistry.

About the Author A.E. Fersman was one of the leading Soviet geologists of the first half of the Twentieth Century. He was totally dedicated in all he did. He had many scientific interests but he is best remembered for his discovery of the huge apatite deposit at Khibiny which led to the development of a major industry north of the Arctic Circle to mine and process these deposits.He was born in St. Petersburg on November 8, 1883. Fersman graduated from the Odessa Classical Gymnasium in 1901 with a gold medal and entered the Mining Academy at Novorossiysk on the Black Sea. In 1904, Fersman became a doctoral student of V.I. Vernadsky. In 1908, Fersman began postgraduate work with Victor Mordechai Goldschmidt. In 1912, he taught one of the worldΓÇÖs first courses in geochemistry (after F.W. Clarke) at the ΓÇÿFree UniversityΓÇÖ. Fersman himself led several expeditions to the Kola Peninsula, Central Asia, Altai, Transbaikal, the Caucausus and the Crimea.
In 1919, Fersman was elected a member of the Soviet Academy of Sciences and appointed Director of the Museum of Mineralogy in Leningrad. From 1919 to 1935, he was also a Professor at Leningrad University. Fersman remained Director of the Museum until his death in 1945. In 1955, the museum was renamed the Fersman Mineralogical Museum in honour of his achievements.A.E. Fersman died in the Soviet Georgian city of Sochi on May 20, 1945. His untimely death was the result of bad health and overwork over a number of years.
Fersman wrote more than 1,500 articles and publications on crystallography, mineralogy, geology, chemistry, geochemistry, geography, aerial photography, astronomy, philosophy, art, archeology, soil science, and biology. He was also a great popularizer of science in Russia. In addition to his contributions to Priroda and other journals, he wrote many books for general audiences, including: Three Years beyond the Arctic Circle (1924); Mineralogy for Everyone (1928, updated and re-published 1935); Twenty-Five Years of Soviet Natural Science (1944); Reminiscences about Minerals (1945); The March of Soviet Science (1945); Geochemistry for Everyone (1958)

You can get the book here or here.

CONTENTS
Foreword 5
Introduction -II
Part One The Atom
What is Geochemistry? 17
World of the Invisible. The Atom and the Chemical Element 24
The Atoms Around Us 31
Birth and Behaviour of the Atom in the Universe 39
How Mendeleyev Discovered His Law 47
Mendeleyev’s Periodic System of Elements in Our Days 54
Mendeleyev’s Periodic System of Elements in Geochemistry 63
The Atom Disintegrates. Uranium and Radium 69
The Atom and Time

Part Three History of the Atom in Nature

1 Response to Geochemistry for Everyone – Fersman