In this post we see Higher Algebra by A. Kurosh. 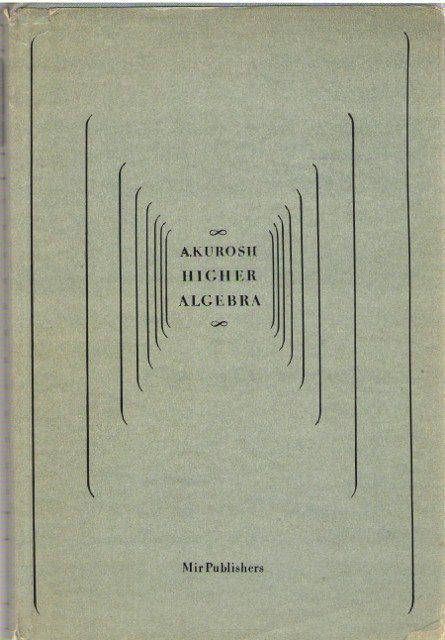 The education of the mathematics major begins with the
study of three basic disciplines: mathematical analysis, analytic
geometry and higher algebra. These disciplines have a number of
points of contact, some of which overlap; together they constitute
the foundation upon which rests the whole edifice of modern
mathematical science.

Higher algebra – the subject of this text – is a far-reaching and
natural generalization of the basic school course of elementary
algebra. Central to elementary algebra is without doubt the problem
of solving equations. The study of equations begins with the very
simple case of one equation of the first degree in one unknown. From
there on, the development proceeds in two directions: to systems of
two and three equations of the first degree in two and, respectively,
three unknowns, and to a single quadratic equation in one unknown and
also to a few special types of higher-degree equations which readily
reduce to quadratic equations (quartic equations, for example). Both
trends are further developed in the course of higher algebra, thus
determining its two large areas of study. One – the foundations of
linear algebra – starts with the study of arbitrary systems of
equations of the first degree (linear equations). When the number of
equations equals the number of unknowns, solutions of such systems
are obtained by means of the theory of determinants.

The second half of the course of higher algebra, called the algebra
of polynomials, is devoted to the study of a single equation in one
unknown but of arbitrary degree. Since there is a formula for solving
quadratic equations, it was natural to seek similar formulas for
higher-degree equations. That is precisely how this division of
algebra developed historically. Formulas for solving equations of
third and fourth degree were found in the sixteenth century. The
search was then on for formulas capable of expressing the roots of
equations of fifth and higher degree in terms -of the coefficients of
the equations by means of radicals, even radicals within radicals. It
was futile, though it continued up to the beginning of the nineteenth
century, when it was proved that no such formulas exist and that for
all degrees beyond the fourth there even exist specific examples of
equations with integral coefficients whose roots cannot be written
down by means of radicals.

1. The Method of Successive Elimination of Unknowns 15
2. Determinants of Second and Third Order. 22
3. Arrangements and Permutations 27
4. Determinants of nth Order 36
5. Minors and Their Cofactors 43
6. Evaluating Determinants 46
7. Cramer’s Rule 53

Chapter 3.
The algebra of matrices 87

13. Matrix Multiplication 87
14. Inverse Matrices 93
15. Matrix Addition and Multiplication of a Matrix by a Scalar 99
16. An Axiomatic Construction of the Theory of Determinants 103

Chapter 5.
Polynomials and their roots 126

56. Reducibility of Polynomials over the Field of Rationals 341
57. Rational Roots of Integral Polynomials 345
58. Algebraic Numbers 349