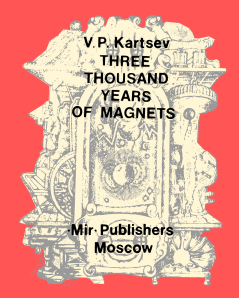 The introduction of the book says:

The universe is magnetic, from its vast, distant nebulae right down to elementary particles, and man is permeated through and through with myriads of magnetic fields from all sorts of sources.

We now take the magnet for granted and have a rather supercilious attitude toward it as an old-fashioned part of school physics lessons, with no idea, at times, of the number of magnets around us. I counted up one day; in my flat there are dozens-in my electric razor, in the radio  loudspeaker, in the tape-recorder, and in a jar of nails. And I myself am a magnet; the biological currents in me give rise to a fantastic pattern of magnetic lines of force. Our Earth, too, is a gigantic blue magnet; and the Sun,a great, yellow sphere of plasma, is an even more powerful one. Galaxies and nebulae hardly visible even by means of radio telescopes are magnets of unfathomable size.

Nobody has ever been able to say (and probably never will): ‘I know everything there is to know about magnets.’ The question ‘Why does a magnet attract?’ will always fill us with a sense of Nature’s inexhaustible variety and encourage to thirst after new knowledge and new discoveries. And, because of the immensity of the problem of magnets, this book will not provide a complete answer either.
Nevertheless we do know a great deal about magnets – in any event enough to exploit their power to our own advantage.

New materials, new magnets, amazing new equipment, and the most complex and sophisticated machines all became possible when scientists began to understand the mysterious manifestations of magnetism. The magnet, it seems, which not so long ago was incomprehensible and uncontrollable, is beginning without demur to obey the orders of man, who is penetrating its secrets. And here we
would do well to recall the words of the] poet Velimir Khlebnikov: ‘No one could fulfil an order more exactly than the Sun if he were told to rise in the morning in the east. ‘

The book was translated from the Russian by Ann Feltham and was first published by Mir in 1975.

The table of contents is as under:

THE KEY TO THE MAGNET 125
GIANTS SHOULD BECOME EXTINCT 125
MISTAKE OR DISCOVERY? 129
SOME PROPERTIES OF SUPERCONDUCTORS 132
THE JOSEPHSON EFFECT 139
A DISCOVERY’S NEW LEASE OF LIFE 150
THE STRANGE COLD WORLD OF SUPERCONDUCTORS 152
CAUTION THEORETICALLY IMPOSSIBLE EQUIPMENT AT WORK 157
SUPERCONDUCTORS IN OPERATION 162
OBTAINING, STORING, AND TRANSPORTING LIQUID HELIUM 183